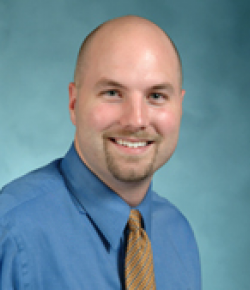 Dr. Hall was raised in Edmond, OK where he graduated as valedictorian of Edmond Memorial High School in 1994. He went on to major in mechanical engineering at Oklahoma State University in Stillwater where he graduated Magna Cum Laude in 1998, earning the title of Outstanding Male Graduate of the university that spring. Dr. Hall then obtained his medical education at the University of Oklahoma College of Medicine, where he graduated with special distinction in 2002. He completed his internship in internal medicine at the OU Medical Center the following year. He then fulfilled a 3-year residency in dermatology at the same location, serving as chief resident in 2006.

After finishing residency, Dr. Hall was excited to return to Stillwater, OK and opened Stillwater Dermatology Clinic, PLLC in August 2006. The growth of his practice led to the construction of a new office building at 1329 S. Sangre Rd., where the practice has resided since April 2009. He loves the small town atmosphere of Stillwater and is happy to be serving Stillwater and the surrounding area. Dr. Hall prides himself on providing the best dermatological care possible and is board-certified by the American Board of Dermatology. He also is a fellow of the American Academy of Dermatology and has served as president and as a member of the Board of Directors of the Oklahoma State Dermatological Society.

Dr. Hall is married to Robin Hall, MD and has three children (Ryan, Bretton and Gabrielle). His favorite pastimes include spending time with his family, playing tennis and golf and attending OSU sporting events.