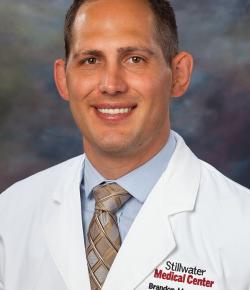 When Dr. Brandon Mason was growing up, there was an old X-ray machine in his parents’ office because of them both being chiropractors.  His interest in that apparatus is what ultimately lead him to the field of Radiology. He was raised in Southwest Iowa, but he attended Oklahoma State University for medical school and radiology residency. During his time at OSU, he was an NCAA All-American wrestler and was also on 2 national championship wrestling teams. After graduating from Oklahoma State, he completed a fellowship in Body MRI at Washington University/Mallinckrodt Institute of Radiology. He now covers all facets of diagnostic radiology, but he specifically has an interest in Prostate MRI (prostate cancer imaging) and Pelvic imaging for gynecological pathology such as for endometriosis.

Dr. Mason has been with Stillwater Medical since 2019, and he is also involved with the AOCR (American Osteopathic College of Radiology) serving on varying committees and boards as well as delivering lectures. He is a journal article reviewer for the journal Abdominal Radiology. In his free time, Dr. Mason teaches radiology residents at OSU medical center.