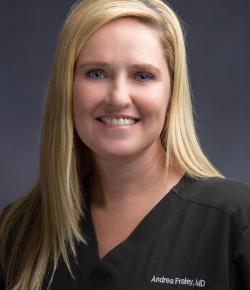 Dr. Andrea Fraley graduated from the University of Oklahoma College of Medicine in 2002 and completed her residency in Physical Medicine and Rehabilitation, in 2006 at the Rehabilitation Institute of Chicago. During her residency, she received The Heller Resident Award, which recognizes the medical resident elected to serve as chief resident.

In her early professional years, Dr. Fraley served as a clinical instructor at the Northwestern University Feinberg School of Medicine in Chicago, IL. From 2006 to 2008, she was an attending physician at the Physical Medicine and Rehabilitation Institute of Chicago. In 2007, she became the medical advisor for the Women’s Tennis Association Medical Board, and held that position until March 2013. When she returned to Oklahoma, she worked with several hospitals in the Oklahoma City metro in medical leadership roles from 2008 to 2017.

In November of 2017, Dr. Fraley opened The Fraley Clinic in Edmond, where she serves as owner and primary physician. Dr. Fraley’s passion for medicine has a holistic approach. She combines medicine with physical therapy to pinpoint and manage her patient’s needs. As an avid lover of sports and an athlete herself, Dr. Fraley understands the importance of physical therapy and pain management. She attended college with full athletic scholarships for tennis and basketball. She now continues her love for sports through snow skiing. Her greatest joy is her daughter Sutton. They love, basketball, swimming, working out, cooking, and traveling.