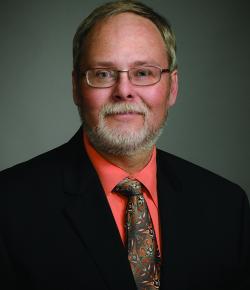 Woody Jenkins, MD, a lifelong Oklahoman, graduated from the University of Oklahoma in 1986 with his microbiology degree. He received his medical degree from OU in 1990 and completed his internship and residency at OU in 1991 and 1993, respectively. Dr. Jenkins joined the Medical Staff at Stillwater Medical Center in 1993, receiving board certification from the American Board of Internal Medicine in 1996 and recertified in 2020. He served as Chief of Medicine at Stillwater Medical Center from 2004 to 2008, 2013 to 2014, and 2017 to 2019. He is currently the Chair of the Education Committee and the Electronic Medical Records Committee. In addition, he served as Chief of Staff from 2002 to 2003 and again from 2012 to 2013.

As a member of the Oklahoma State Medical Association, Dr. Jenkins has held many positions, including current co-chair of OSMA Rural Section and trustee to the Board of Trustees. He is Past President of OSMA, Past-Chairman of OSMA Board of Trustees, and has served on the OSMA CME Accreditation Review Committee and the Physicians’ Campaign for Healthier Oklahoma. Dr. Jenkins is the current President of the OSMA Foundation and has been the Chairman, now the Vice-Chairman, for OMPAC (Oklahoma Medical Political Action Committee). He currently serves on the Physician Liability Insurance Company Physician Advisory Board. He is a member of the American Medical Association and serves as alternate delegate, representing OSMA to the AMA House of Delegates. He is the Stillwater Medical Center representative to the Organized Medical Staff Section of the AMA and was recently elected to the OMSS Governing Council. Dr. Jenkins is also a member of the Payne-Pawnee-Noble County Medical Society, having been President of the county medical society for many years.

Having a passion for the community, he volunteers for the Stillwater Community Health Center, helping run the Diabetic Clinic.

In 2009, Dr. Jenkins was the recipient of the Tim K. Smalley Leadership Award. This award was developed by the Medical Staff at Stillwater Medical Center to honor physicians for their outstanding Leadership, Professionalism, Clinical Expertise, Friendship, and Mentorship.

In 2019, Dr. Jenkins was the recipient of the Ed Calhoon, MD, Leadership in Medicine Award. This award was established by the OSMA Board of Trustees in 2001, and is presented to an OSMA member physician in recognition of his or her distinguished leadership and service to organized medicine at the county, state, or national level.

In 2020, Dr. Jenkins won the University of Oklahoma College of Medicine Alumni Association Physician of the Year – Private Practice.

Dr. Jenkins enjoys bowling and is currently president of Stillwater Bowling Association. Dr. Jenkins has bowled seven sanctioned USBC/ABC perfect 300 games with the last being April 24, 2016, and has bowled one sanctioned 800 series.