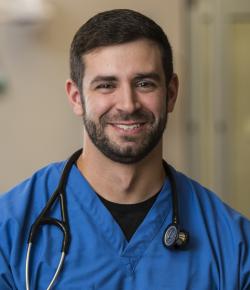 Jeremiah graduated from OSU in 2009 with a Bachelors in Health Education and Promotion.  He served in the Air Force from 2006 to 2012 where he was deployed twice and spent time in Iraq, Afghanistan and Africa. He started working for SMC as a medical assistant for Dr. Hall.  While working, he was finishing pre-reqs for nursing school. He graduated in 2014 from NOC nursing program.  After graduation, he briefly worked at Mercy until an nursing job opened at SMC. He graduated from nurse practitioner school in August 2017.