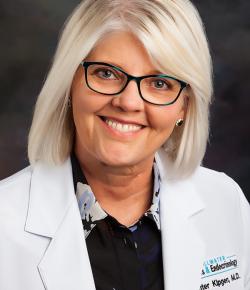 Armed with a mind of the utmost intelligence and a heart of compassion, Dr. Kipgen is serving her patients with a multitude of accreditations, honors, awards, research and experiences under her belt.

Born and raised in Tahlequah, Okla., Dr. Kipgen studied pre-pharmacy at Oklahoma State University for two years. She continued her education at the University of Oklahoma Health Sciences Center, where she received a Bachelor of Sciences in Pharmacy with Distinction. Dr. Kipgen then continued her education and received her Doctorate of Medicine with Special Distinction, a Residency in Internal Medicine, and a Fellowship in Diabetes, Metabolism and Endocrinology from the University of Oklahoma Health Sciences.

Dr. Kipgen privately practiced in Oklahoma City for 21 years before moving to Stillwater in August of 2016.  She now practices at Stillwater Diabetes and Endocrinology. Dr. Kigpen is involved in several medical organizations, including The American Medical Association, the Endocrine Society and the American Diabetes Association, and has received a lengthy list of honors and awards, such as the Patient’s Choice Award in 2015, the Compassionate Doctor Recognition award in 2014, the Top 10 Doctor – Oklahoma Endocrinologist honor in 2014 and the On-Time Doctor Award for 2014-2015.

When not caring for her patients, Dr. Kipgen enjoys riding horses, weightlifting, reading and spending time with her husband and three children on the farm.